American author, scientist and retired Major General Jerry White visited Australia in June this year. He was the third International President of The Navigators, serving for 18 years, and succeeded in 2005 by Mike Treneer.

A respected and well-known Christian author, conference speaker and a missionary, Jerry came to speak at several gatherings including the Navigators Senior Business Luncheon in Sydney, and the Brisbane Navigator Community Rally. 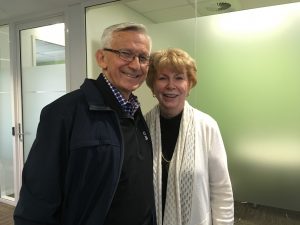 While in Brisbane, he was also the Keynote Speaker at the Christian Management Association Annual Conference, which ran on 5-6 June. Speaking on “Defining Events” and Leadership issues, Jerry shared his wisdom and experience, both as a leader and as a servant of God.

Jerry is currently on the Board of the US Navigators, as well as other professional organisations. He is regularly booked for speaking engagements at retreats, and radio and television shows. As a scientist, he has co-authored a well-received textbook on astrodynamics. Among the books he wrote with his wife, Mary Ann, are: Unfinished (2013) and To Be A Friend (2014).