Home » Latest » The Power of Investing in One

posted by Navigators on February 28th, 2018 in Discipleship | Generations

Imagine running the relay race for the Olympic team. As you pass the baton successfully to the final runner, you cheer on as they cross the finish line.

They first met at a gathering of the African Navigators in Kenya, where they shared a meal together. Throughout that meal, they hit it off and got into a conversation about areas of the faith they were wrestling with. 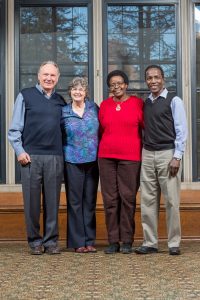 The men and their wives. (L – R) Mike and Chris, Stephanie and Mutua.

From then on, Mike and Mutua reconnected whenever Mike was back in Kenya, and a deep, trusting relationship grew. By the time Mike moved from Nigeria to Kenya in 1982, Mutua and his wife, Stephanie, had joined Navigator staff to do university ministry. Mike shared his experiences and encouraged Mutua in his early days in ministry. They met together regularly, their wives met together as well, and their families became good friends.

They challenged, served, and encouraged one another in leading the work in Kenya and Africa.

As Mike became the Africa Director, Mutua stepped into the Kenyan National Director role. Mike led Mutua and trained him as a Navigator leader. They challenged, served, and encouraged one another in leading the work in Kenya and Africa.

Throughout the 1990s, the Navigator work spread rapidly throughout Africa. Navigators expanded across the continent as missionaries. Mike realised he seriously needed to ready Africans for the future of the work. As he prepared to transition from Africa Director to International President, Mike continued to train Mutua and other leaders. When he eventually moved on to his new role in 2005, he prayed about who would lead the African work and God clearly led him to Mutua. It was a joy to work with Mutua; he had much confidence in him not only as a colleague but also as a close friend. Over the years, it was an incredible privilege to see the response to Mutua’s leadership and to see how the work continued to move forward even more strongly under an African leader that people loved and respected.

As Mike prepared to step down from his role as International Director, he started praying about his successor. In the process, people nominated Mutua and it became clear to all that he was the right one for the position. Mike was pleased to see Mutua step into this position in 2015, knowing his passion to see the Navigator work go forward. He had seen Mutua’s heart grow through each stage, and trusted God for what He would do through Mutua.

Focusing deeply on a few to see the nations reached truly works. Mutua is just one example. You can see the ripple effect from Mike, a British missionary, to Mutua … to Kenya … and throughout Africa. This is the power of investing in one man who does the same with others. 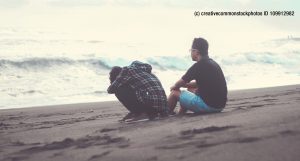