Easter in Australian society is thought of as a holiday time.  And many – most? – people don’t understand the significance of Easter, and often they don’t want to. A local Eastern Sydney newsletter said in their central article on Easter a few years back: “what the hell is Easter about anyway?  … To me it makes as much sense as bunny rabbits handing out chocolate eggs. Whoever came up with that idea must have been smoking from the same pipe as people who honestly believe in the resurrection … It astounds me that two whole millennia have passed and people still actually dedicate their lives to this blind faith bulldust.”1 Most people wouldn’t be as impolite as to say something like that to our face, but they might say, “Well, if it helps you to believe that, good for you”. Code for: “you’re a nice person but your ideas are whacky.”

Is the Resurrection “blind faith bulldust”? Let’s look at the evidence because, if the resurrection isn’t true, our faith is in vain and we are misguided fools as the apostle Paul says2 – the Eastern Sydney newsletter is spot on. Empty Tomb. On the third day, the tomb was empty. That this was so is clear as neither the Roman nor the Jewish authorities disputed it. If they could have proved that this wasn’t true, or produced the body, then the whole ruckus would have gone away (cf. Matthew 27: 62-66). But, they didn’t!

Roman Guard. Second, the situation at the tomb is telling. The body was placed in a solid rock tomb and a one-and-a-half-to-two ton stone rolled in front of the entrance using levers. A Roman guard was placed outside and a Roman seal affixed to the tomb. And somehow, the large stone was moved and the guard had fled. Getting a Roman guard to flee is no mean feat. Rome owed its conquest of the world to its continual military training, exact observation of discipline in their camps and tireless cultivation of the other arts of war. A Roman guard unit was four to sixteen men, each trained to protect two metres of ground. The sixteen men in a square were supposed to be able to protect 36m against an entire battalion (500-600 men) and hold it. These were highly skilled, excellent soldiers.

Not only were these first rate soldiers, but fear of punishment normally produced flawless attention to duty. The “stolen” body meant that the guard could have been put to death for allowing the Roman seal to be broken or for falling asleep on piquet – they normally had four constantly awake throughout the night. It just doesn’t add up.

Eyewitness Reports. Third, there are the eyewitness reports. Paul said that Jesus appeared to 500 of His followers at one time, the majority of whom were still alive and could confirm, or deny, what he wrote. Not one who denied this was produced by the authorities! This is weighty evidence. If I said that yesterday I saw the ex-Governor General Mike Jeffrey (who died earlier this year) in Civic yesterday – alive and in the flesh, talking about his time as Governor General and his service in the Army and after that we ate lunch together, you might say I was mistaken, “General Jeffrey is dead, I saw the funeral on telly …” But if I say that 500 other people were at the function with us having lunch and General Jeffrey spoke to all of them, ten of whom were his very close friends and relatives, so really hard to fool and you can check with them, you have to take that much more seriously. Eyewitness accounts are strong evidence – and 500 of them, including people who knew Jesus well, combined with other independent eyewitness accounts from different people in different places, is very strong evidence.

Women First Witnesses. Further, His appearance to the women first is authenticating in itself. Women, according to Jewish principles of legal evidence, were invalid witnesses. (I know this seems crazy to us, but it was the culture at the time). So, if the stories had been made up, women certainly wouldn’t have been included as the first witnesses. Much more palatable would have been a first appearance to His inner circle of disciples.

Die for a Lie? Next piece of evidence, the disciples were ordinary men with ordinary fears. When Jesus was arrested, they deserted Him (Mark 14:50). Peter denied Jesus three times after Jesus was arrested, yet a short time after the crucifixion and burial Peter was preaching boldly that Jesus had been raised despite the threat of death. And we note that all the apostles died martyrs’ deaths except John, who died in exile. Did those men die for what they knew was a lie? I hardly think so! Charles Colson’s experience in Watergate is particularly instructive on this point. He says, with the most powerful office in the world at stake (the Presidency of the US), the power and the privileges that go with that, a small band of hand-picked loyalists, no more than ten, could not hold a conspiracy together for more than two weeks. And the pressure was not that great: there would be some embarrassment and at the worst some might even go to prison, but there was no grave danger, no one’s life was at stake! Yet critics ask us to believe that eleven men, with the complicity of up to 500 others, perpetuated a lie about the resurrection under enormous pressure including dying for it.

Change in Disciples. The resurrection turned this band of defeated cowards, almost overnight, into the resolute band of enthusiasts who braved opposition, cynicism, ridicule, hardship, prison and death in three continents as they preached everywhere Jesus and the resurrection without even recanting once! As Colson says, “take it from one who was inside the Watergate web looking out, who saw firsthand how vulnerable a cover-up is: Nothing less than a witness as awesome as the resurrected Christ could have caused those men to maintain to their dying whispers that Jesus is alive and Lord”3.

The resurrection isn’t proved by some mathematical formula, or by an experiment like one that shows that water is made up of 2 oxygen atoms and one hydrogen atom. It’s proved by the cumulative weight of evidence. As Kings Counsel Sir Edmund Clarke says, “over and over again in the High Court I have secured the verdict on evidence not nearly so compelling.”4

Importance of the Resurrection

The resurrection is immensely important. As Paul says in 1 Corinthians 15: 15-19, if the resurrection isn’t true we would be still dead in our sins, our faith is futile, we are to be pitied and, worse of all, we are misrepresenting God. So why is this so?

Vindication. The resurrection is important because of what it says about Jesus. Romans 1:4 says Jesus “was declared with power to be the Son of God by his resurrection from the dead”. When Jesus unexpectedly and astonishingly rose on the third day, it confirmed that he was no ordinary man. It was like a giant exclamation point separating him from all other mortals. It confirmed for these eyewitnesses that his teaching was true. It also affirmed his identity as God, for who but God could exercise that kind of power. Indeed as Acts 17:31 says, “God will judge the world with justice by the man He has appointed. He has given proof of this to all men by raising him from the dead”. The resurrection is God’s vindication of Jesus’ radical personal claims to divine authority.

Effective. The resurrection is important because it proves Jesus’ death was effective. It proves that Jesus’ death took sin’s punishment. Peter says in Acts 2:24, “God raised him up, loosing the pangs of death, because it was not possible for him to be held by it.” Why was it impossible for Jesus to remain dead? Because God is more powerful than death and the devil? Yes. Because it is incongruous for the One who was and is and ever will be to die? Yes. But I think most importantly for us is that the grave could not hold the Son of Man because it had no claim on him. The wages of sin is death. As the sinless saviour (Hebrews 4:15) He did not have to die. What this means for us is that as He had no obligation to pay the wages of sin, His death paid for our sin. The debt has been paid. Divine justice has been satisfied. The punishment is over. We can have eternal life!

Enough. The resurrection means the death of Jesus was enough—enough to atone for sin, enough to reconcile us to God, enough to present us holy in God’s presence. Christ won; sin, death, and the devil lost—that’s the good news of the empty tomb. And that’s why Romans 4:25 says Jesus “was delivered up for our trespasses and raised for our justification.” The cross and the empty tomb cannot be separated. The two events are dependent upon each other. Together they demonstrate that Christ’s payment for sin has been accepted and his victory is ours.

Praise God that He is risen!

This Easter, let’s thank God for Jesus, glory in the cross5, and celebrate the resurrection! 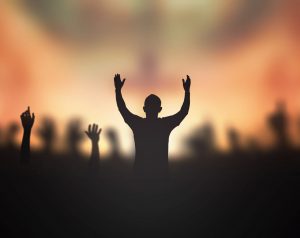 Why is Good Friday good?

Easter in a Covid-19 Environment To Know Christ – And Make Him Known