posted by Navigators on February 8th, 2018 in Evangelism | Missions

“It is too small a thing for you to be my servant to restore the tribes of Jacob and bring back those of Israel I have kept.  I will also make you a light for the Gentiles, that you may bring my salvation to the ends of the earth.” Isaiah 49:6

Jeanette and I, along with 85 others, have just been involved in drafting the 10 year strategic plan for the Navigators Asia Pacific Region. We considered some interesting (disturbing) facts as we met over the last four days: 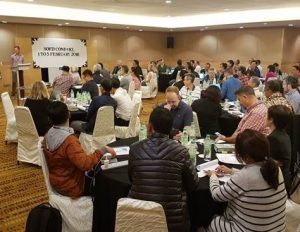 We believe the Lord led us in this process as we focused on him each morning for an hour before we started our planning discussions, worshipping Him and asking Him to guide our planning. Our plan centres around advancing the gospel into the nations of Asia Pacific and into the major religions and secularism that is so prevalent in the region.

Having finished that planning time, I then lead our Church Discipleship Ministry planning session with 20 other leaders from Australia, Fiji, Indonesia, Myanmar, Philippines, Singapore and Tonga. Our aim during that time was to consider how we might be a blessing to the churches in our areas, and deepen our partnership with them to advance the gospel and bring Glory to God throughout the Asia Pacific.

For the glory of God