“As the Father has sent me…”

posted by Navigators on November 5th, 2019 in Evangelism | Gospel | Missions

The word “mission” has its origin from the Latin “mittere” used to translate the Greek “apostele”, giving us the word “apostle”. It has the meaning of God sending and people being sent for the purpose of salvation and revelation. The notion of sending and being sent is throughout the Scriptures. A few of the New Testament examples are Matthew 9:38 (pray to send), Matthew 28:18-20 (sent to go and make disciples), John 17:18 (sent into the world), John 20:20 (God sends Jesus and Jesus sends His disciples) and Acts 1:8 (sent as witnesses to all nations).

Being sent applies to all Jesus’ disciples, including those who stay within their own culture. However, those that remainwithin their birth culture may not recognise that they too are sent. People who hear the call of God to bring Good News to a different culture are reminded daily that they are sent, as they are confronted by alternate perspectives. But we who stay within a culture may not have clarity on being sent into the world. As a result, it is all too easy to fall back into a passive conformity to our culture with all its artificial and idolatrous attractions.

Being sent applies to all Jesus’ disciples, including those who stay within their culture.

There are two competing stories to which we belong. One is the story contained in our culture and the other is the story in the Scriptures. Both are comprehensive stories about life and its purposes, and both demand our allegiance.

In the words of British theologian and missionary Lesslie Newbiggin:

“If we take the Bible in its canonical wholeness, as we must, then it is best understood as history. It is universal, cosmic history. It interprets the entire story of all things from creation to consummation, and the story of the human race within creation, and within the human race the story of the people called by God to be the bearers of the meaning of the whole, and—at the very center—the story of the One in whom God’s purpose was decisively revealed by being decisively effected. It is obviously a different story from the stories that the world tells about itself.”

“[The Bible] interprets … a different story from the stories that the world tells about itself.”

The cultural story is easy to absorb but it is a poor substitute for God’s story. The Scriptures confront us with an alternate story that challenges the cultural idols we have formed.

The Scriptures reveal that God’s overarching purpose is the redemption of a people who are then sent for His purposes. As the community of ambassadors of Christ (2 Corinthians 5), we are motivated by our reverence for the Lord (v11), compelled by His love (v14), see people from an eternal perspective (v16), and have appreciated God’s reconciliation (v19). We operate from a position of weakness, in humility, and are willing to implore people (v20) with a message that is counter-intuitive to the assumed cultural story (v13).

However, it is easy to perceive the world through the cultural story rather than the story that is expressed in the Cross. In doing so, we are in danger of squeezing out the purposes of God, reducing His plan to our personal flourishing. When we reduce God’s purpose exclusively to our well-being, we distort God’s character (an example is universalism, which posits that all will be saved since God will not judge as He is only concerned about our flourishing). Our redemption is more than personal salvation or a means to secure material blessings. We are called to Jesus, bringing Him and His kingdom into the world into which we are sent.

Embracing God’s cosmic story means aligning ourselves with God’s purposes which includes living as a body of people sent into our culture. This necessitates transforming our understanding of what it means to live well, challenging our unthinking acceptance of the immersive cultural story (Romans 12:1,2).

In John 20:20, Jesus shows the wounds of His crucifixion to His disciples and says:

“Peace be with you. As the Father has sent me, so I send you”.

We are challenged to live in God’s story and to live as sent ones for God’s purposes. 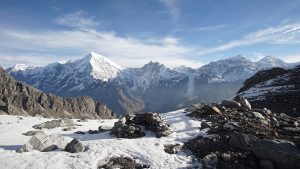 A Heart for the Nations