Your prayer has been answered!

Yesterday the Burmese student I asked you to pray for in August received Christ. I love how God brought this about. As I sat down with this student yesterday, the pressing question on his mind wasn’t, ‘How can I be saved’, but ‘How can the message about Jesus get to everyone? Whose responsibility is it to bring the gospel to the ends of the earth?’

We considered the audience of Matthew 28:18-20. Historically, this was an imperative given to Jesus’ immediate disciples; then, implicitly to the believers in the church in Antioch who received Matthew’s letter; and finally, by Jesus’ Spirit to all believers today, who guided this command to be included in the scriptural cannon, handed down through history, and translated into English.

The student seemed deeply convicted to play his part in sharing the good news with those who have never heard or understood. But we’d missed a key step – becoming a disciple of Jesus himself!

So, I asked if he believed. He said he was certain that Jesus lived and died, and pretty sure he rose from the dead, but confessed that he wasn’t sure he could win a public debate on the resurrection just yet. I assured him that whatever convictions he had sounded bigger than a mustard seed (Matt. 17:20) and he need not worry about public debate just yet.

We prayed together, asking for forgiveness based on Jesus’ work, and when he opened his eyes, he was filled with joy.

… when he opened his eyes, he was filled with joy.

This is what I love about Navigator-type ministries – that in the same breath that someone receives Christ, they offer themselves as living sacrifices to make disciples of all nations. That even before this young man received the eternal riches in Christ Jesus, he felt the weight of responsibility for the unbelieving nations. Pray that God would develop him as a labourer to make many disciples of Jesus in Myanmar.

After praying together, my mind was flooded with thousands of words of encouragement and advice. But nothing is more important than to appreciate what has happened. We opened 2 Corinthians 5:17 and reflected on the fact that ‘the old has gone and the new has come’. Even as this student’s faith grows, he will never be more saved, more a child of God, have more spiritual riches, or be seen with greater divine favour, than in that moment.

In parting, I encouraged this student to pursue knowing God relationally rather than just thinking about God – as effective as YouTube apologetic videos have been for him thus far, a relationship with God can be so much richer. So, as he begins to converse with God through scripture and prayer, pray that ‘the Father of glory may give [him] the Spirit of wisdom and of revelation in the knowledge of him’ (Eph. 1:17). 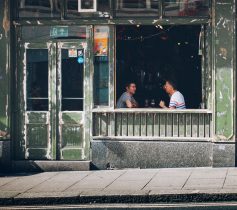 God-talk, the Gospel and the Pub