You can learn a lot about a country from the people or events they celebrate in their monuments. In the USA there’s a great bronzed statue of Abraham Lincoln sitting in his mighty marble temple in Washington. Down the street is a thirty foot statue of Thomas Jefferson. In Paris, you see Napoleon. Throughout London and the rest of England are monuments of Wellington and Nelson. In Australia we have the odd sporting hero statue at a couple of the major sporting grounds, but there is nothing that pervades our nation like the cenotaph. Millions of Australians will gather around one each ANZAC Day. And if there is a figure on the monument, it won’t symbolise or represent any great politician, general, or scientist. It will be a statue that represents the ordinary serving person.

Let me share a story of one such ordinary. It was at the battle for Lone Pine from 6-9 August 1915, which has rightfully gone down in Australian military history as one of the toughest and most brutal ever fought by Australians in any war. Close to 2,800 Australians became casualties, and the Turks lost almost 7,000 men. Seven Victoria Crosses of the total nine awarded for the entire Gallipoli campaign were awarded to Australian troops during these four days.

Hugh Anderson took part in the Battle but didn’t receive any special recognition. He was an ordinary Aussie soldier and this is the sort of thing all the soldiers did. He wrote about it to his mum from hospital.

“We got to our positions about 4 PM and the artillery commenced bombarding the Turkish trenches and they returned the compliment … I was nervous I can tell you and put up many a prayer for courage.

” the officers were … calling 3 minutes to go, 2 minutes to go, 1 minute to go … and… three shrill blasts of a whistle. … Over the parapet we go. I will never forget that picture, I was well up with the rest racing like mad, all nervousness gone now. The shrapnel falling as thick as hail, many a good man went down here although I never noticed it at the time.

“I slid down into the trench, the Turks ran round a corner and got into a large cave place dug in the trench side … The first man to follow was shot dead …Captain Milson took command … threw a bomb and dashed across. A dozen Turks shot him and he fell dead the other side. I was next and as I ran I threw my rifle into the possie and pulled the trigger … but no one followed and I was there alone with no bombs and only my rifle …

Hugh Anderson survived Gallipoli and went on to fight in France where he was killed in the second Battle of Bullecourt on 5 May 1917.

War is destructive, combat is devastating, and the human beings touched by it are affected physically, emotionally and spiritually. Photo: Unsplash.

In remembering, we are reminded that war is destructive, combat is devastating, and the human beings touched by it are affected physically, emotionally and spiritually. We should be a grateful people never forgetting, nor failing to esteem, the sacrifices of ordinary Aussies. We remember the sacrifice of those who went before us because there is something noble about sacrifice, isn’t there?

And the sacrifice of Jesus is still at the centre of the symbolism of Anzac Day with its crosses for the fallen, the sacrificial language, the reverence. The oft-used quote from John’s gospel highlights Jesus’ sacrifice: “My command is this: Love each other as I have loved you. Greater love hath has no one than this, that they lay down their life for their friends.”

On Good Friday we remembered the sacrifice of the perfect man, God incarnate, Jesus, who died in our place, in my place and in your place. What a loving God we have who foots the bill of our redemption, and offers us our freedom and  dignity, life eternal, heaven as a gift! You and I don’t have to do anything except accept the gift, and then of course we will want to live for Him out of gratitude for the amazing love He showed us in laying down his life for us. What a sacrifice!

The story of ANZAC touches a deep part in all of us. It’s a story of sacrificial living and giving and loving. The precious threads of sacrifice, love and hope are woven right through the ANZAC story, and they resonate with what Jesus did for humanity. Jesus purchased our freedom in a spiritual sense. The service men and women, ordinary people – whether they were young ANZACs like Hugh Anderson, young nurses in the chaos of Singapore, sailors or aviators in WWII,  national service people in the jungle of Vietnam, or special forces soldiers in Afghanistan, who died in the service of this nation – were seeking to secure us freedom in an earthly sense. We have all benefited from their death and Jesus’ death. 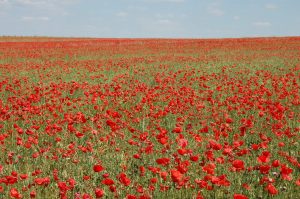 Sharing ANZAC Day with you