Home » Latest » Born to Reproduce – A Story by Tony McLennan

Born to Reproduce – A Story by Tony McLennan

Dawson Trotman gave a signature message called “Born to Reproduce” which sets out the normal expectation that mature believers are to reproduce the spiritual life they have by bringing the Gospel to new people. The passion to be involved with the Holy Spirit in leading others to faith in Jesus has been a central one for Navigators ever since. This story … [was] the first of a regular column devoted to telling each other stories of how God is still reproducing new life through Navigators today.

In 1994, I visited Adelaide for business. I invited a promising young businessman and his then girlfriend out to dinner where God led me to share my testimony.

He was a football star and she had left her husband to be with him. They had decided on a hedonistic lifestyle.

When I shared that I had come to Christ, they both humoured me. “We are happy for you, Tony. But it is not for us,” they said.

Later, walking along the streets of Adelaide with the young man, I told him, “With God, there is only Light and Darkness. There are no shades of grey.”

And that was it … or so I thought. I returned to Sydney. I prayed about him. He was never far away from my thoughts.

“I was gripped with this enormous feeling of guilt …! I knew deep down that God was telling me to stop …”

Back in Adelaide, about 1:00 pm on a Saturday afternoon the young man was asleep with his girlfriend. He woke up. Got out of bed and looked back at her asleep. He was later to recall, “Suddenly, I was gripped with this enormous feeling of guilt …! I realised that all along I had been using people for my own pleasure.”

Overwhelmed by grief over his sin, he staggered about ten feet from the bed and collapsed in a chair and wept uncontrollably. His girlfriend awoke and could not console him. She thought he had lost his mind and tried to call an ambulance.

Deep down the young man knew God was telling him that he had to end his sinful way of living. He did something that he had never done before … he started reading the Bible, day and night … looking for clues.

He came to Sydney. I encouraged him to pray and accept Christ. The following day he announced that he had. He became an outstanding success in business. He was later to marry a lovely girl who became a Christian through an Alpha course that both he and I had invited her to attend. God blessed them with a daughter. They eventually became elders in a wonderful church. Together, they live for Jesus and seek to bring others to Him.

“And when he [the Holy Spirit] is come, he will convict the world of sin, and of righteousness, and of judgment.” John 16:8

Tony McLennan lives in Sydney and is part of Business Life, a ministry to professional people in the workplace. 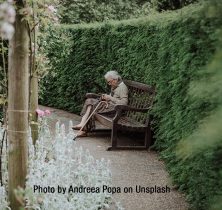