posted by Navigators on October 25th, 2017 in Discipleship | Generations | Grow

It was my first week living back in Australia when at the end of a Navigators conference I needed a ride back to my temporary home in Sydney. Mike & Siân said they lived near my friend’s house and would be glad to drop me along the way. Little did we know, that was the start of a fruitful and enjoyable relationship.

I don’t recall much of the conversation during that initial car ride, yet I retain a strong impression of a young couple who loved each other, who loved Jesus and who were eager to learn, grow and serve in His Kingdom. While they would soon relocate from the city up to the Central Coast and start a family, Mike & Siân remained connected with the Navs – both organisationally and missionally.

While we’re not their only connection point to The Navigators, God has enabled us to come alongside them in various ways these past five years. When we organised a Marriage Retreat for several young couples, we deliberately chose a holiday house in their town which allowed them to fully participate, even with a newborn. As the only parents among newly married couples, Mike & Siân offered valuable perspective to our conversations.

Most significantly, Mike plays a strategic role in what God is doing among young workers in the city. At first, we met personally over lunch near his workplace and discussed what it meant for him to follow Jesus on the job. A year later The Navigators launched a monthly [email protected] breakfast in the CBD and I invited Mike to participate, even though I knew this was not convenient for his lengthy commute from the coast into his North Sydney office. But he saw the value in catching an earlier train into the city and then another train back across the bridge, just for the fellowship with others seeking to live out the Gospel 24/7. fellowship with others seeking to live out the Gospel 24/7.

Gradually, Mike began to invite others to our breakfast gathering and even lead some of our discussions. As we formed a leadership team for this ministry, he was among the first to raise his hand. Last year Mike and I began to pray for an opportunity to launch another [email protected] group near his office in North Sydney, to develop missional fellowship among workers across the bridge. God has now blessed this initiative with co-leaders who share his vision.

We are thankful for Mike & Siân’s partnership in the gospel and confident that God will bring his good work in them to completion over a lifetime until Christ’s return. (Phil. 1:3-6)

God will bring His good work in them to completion over a lifetime until Christ’s return. 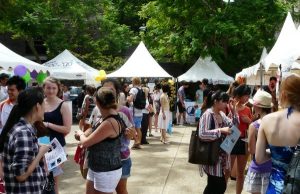