Home » Latest » I Heard the Voices of Angels

I Heard the Voices of Angels

posted by Navigators on September 13th, 2018 in Blog | Generations | Missions

Grant spoke on “Living for Jesus at Work”

Earlier this month, our National Director, Grant Dibden, and his wife, Jeanette, joined the Tonga Conference and celebrated 40 years of Navigator Ministry there. Here is just a snippet of what happened as shared by Grant…

What an inspiring experience our trip to Tonga was! Not only did we have the prison ministry, but we also heard from the noble ministry. Lord Fakafanau, the current speaker of Parliament, shared and has graciously given the Tongan Navigators a plot of land on which they will build a headquarters. 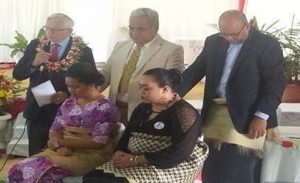 Jerry White, International President Emeritus, praying for two courageous women whose response to the call of mission was: “Just tell us and we’ll go!”

Many people we chatted to had inspiring faith. Here’s just one example: Jeanette and I spoke with two young women who want to be missionaries. I asked them where they felt God was leading them. They replied that they were available to God to go wherever He sent them and so they would go wherever the Navs sent them. I asked about our top three priorities in Asia Pacific: Bangladesh – “Sure”; North India – “Sure”; Cambodia – “Sure. You just tell us and we’ll go!” Such an encouraging faith and trust in God!

Angels’ Voices – a choir of men who found the Lord through Navs’ prison ministry.

On Sunday afternoon we listened to a men’s choir sing as part of the celebrations of the Tongan Navigators’ 40th Anniversary celebrations. These men are prisoners. Many of them hardened criminals sentenced to life or long imprisonment. But they have found Jesus through the ministry of the Tongan Navigators and so they were released from prison (under guard) for the celebrations. They call themselves “Angels’ Voices” and they did indeed sing beautifully and aspire to behave like angels.

We have a video about the beginnings of the Tongan Navs – now numbering in the hundreds  https://navigators.org.au/video/tonga-generations/. Have you seen it? Many of those featured in the video were at the Conference and it was great to chat with them. 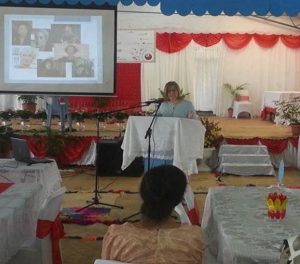 The Power of Example